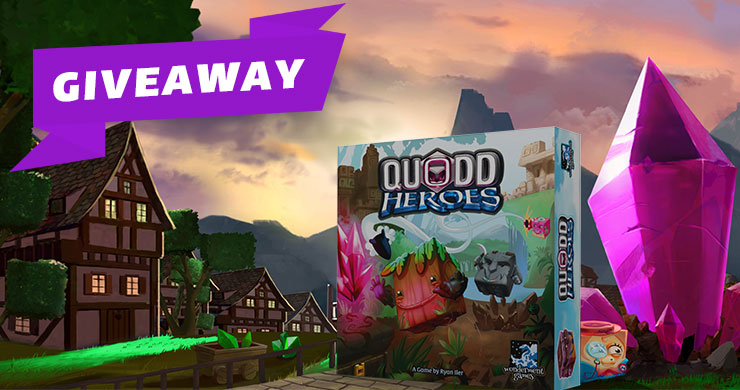 We are very excited as we had an interview with Ryan Iler the designer of Quodd Heroes in which he shared with us information and exclusive images of this truly unique game! Quodd Heroes has been running on Kickstarter and it is halfway to its funding goal!

Ryan was kind enough to provide us with a Deluxe Edition copy of the game to use as a giveaway during the Kickstarter days! So help this game get funded and enter the competiton below for a chance to win this copy of the game!

Quodd Heroes is a fast-paced adventure game coming with unexpected events and a lot of player interaction. It features unique mechanics and gameplay, as well as really gorgeous art! ( We looove the aesthetics of this game! )

The characters of the game are represented by cube-shaped miniatures. Each player chooses one of them along with a player board. You start your move by tumbling your character into an adjacent space. Then, you activate any board elements and finally you activate your movement skill according to the top face of your cube-shaped hero.

Quodd Heroes has been designed to allow players to come up with their own game types. It features a number of scenarios with several categories of game modes. These include quests where players race each other to complete objectives, rally where players sneak, jump, teleport and tunnel trying to reach all of the rally points, and finally there are team scenarios in which players team up and test their combined skills and cunning. The game will be given away only if it gets funded on Kickstarter.
The Giveaway ends on January 3rd the same day the Kickstarter Campaign of Quodd Heroes ends. The winner will be picked randomly and the draw will take place on January 4th and the winner will be informed shortly! All giveaways follow BoardGame Stories’ Terms and Conditions!